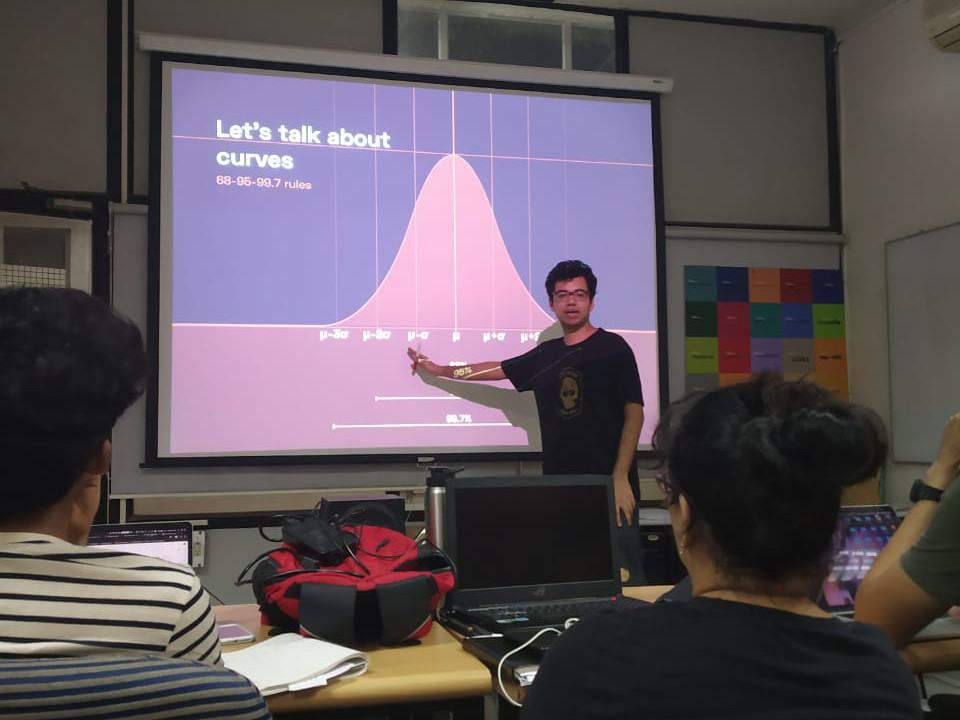 Nobody even cracked a smile when I showed this slide, which tells you just how stressed people were about this course. Photo courtesy of Bhawna

In my third semester at IDC, I was a teaching assistant for the Design Research Methods (DRM) course. Students were expected to have prior knowledge of some statistical concepts, but a lot of students hadn’t studied math or statistics in a few years and found the class hard to follow. I taught a supplementary class that started with an intuitive (I hoped) understanding of some of these basic ideas. You can get the slides I used here: link

A question about an area of interest. Eg. Is the proportion of women in design higher than in engineering?

A statement about the relationship between 2 variables. Eg. There is no difference between proportion of women in engineering and design.

An experiment is conducted to find the effect of one variable on another.

The variable we can control. Eg. hours of sleep, design of chair.

The variable that varies because we changed the independent variable. Eg. marks in test, comfort rating

Circumstance not under investigation that is kept constant while testing.

Circumstance not under investigation that is allowed to vary randomly.

Circumstance not under investigation that has impact on the dependent variable.

Levels of a variable

The number of possible states of a variable are called the levels of the variable.
For eg. in our experiment we can have 3, 5, 7, 9 hours of sleep, so hours of sleep variable will have 4 levels.

We can say that B is better, but it’s possible that B was just more generous with the rating and would have given design 1 a 6 as well.

Design 1 and 2 share some elements. If you learn to use 1, 2 is easier to use. Therefore if you use 1 first or 2 first will impact the ranking.

Therefore, we give half of the people design 1 first and the other half design 2 first.