As I look back on my time at IDC I think that I have changed quite a bit in my outlook towards design. As a 22 year old engineering graduate I had discovered an interest in design, had learned the software tools and even found paid projects. I had proven to anxious parents that this was a viable career option, and had a job offer in hand. And yet I felt that I did not know enough to be doing this professionally, and I applied to design schools in the hope that I would be able to fill the gaps in my knowledge. I did not have any intention of becoming a researcher when I applied to the M.Des. program. I didn’t really know much about how academic research works, and I had never read a research paper in its entirety. I had thought that I would learn design theory, and while there was enough of that, I think the really important things I learned were asking questions, challenging assumptions, and how to read, conduct and write about research work.

The research methods course in the third semester introduces M.Des. students to the concept of academic research and provides a number of quantitative research methods as methods of analysis. Students learn about structuring arguments and conducting statistically valid experiments. The Design Research Seminar which follows in the fourth semester is a research project in which students are expected to utilise the theory covered in the Research Methods course to identify research questions, design a study, conduct the study, analyse the collected data, and write it up as a research paper.

After years of adapting to an education system that largely tells you what to do, or pick out of a set of limited options, it is strangely paralysing to be asked to choose what you want to work on for the latter half of your time at IDC. You are no longer on the well trodden path of things known to man—instead, you embark on a journey to do something new, something that has never been done before. It’s hard.

I had spent much of my third semester struggling to design a “Novel Font Search and Browse tool”. I didn’t have too much to show for it at the end of the project, and I thought it would be best to try something different. I felt I hadn’t done enough research (both primary and secondary) and I had spent a lot of time struggling to build out things in code, out of a belief that a search tool for fonts couldn’t really be prototyped on paper. I wanted to be smarter about picking a good topic for my final semester, and I thought it would be a good idea to use my DRS paper to inform my P3 design project.

I had found it difficult to argue that my project was solving any significant problems. I was convinced myself that picking fonts online could be made simpler, but I was also quite aware of the fact that 12 out of my 16 peers had picked projects in the domains of education, healthcare, accessibility or agriculture. Student design projects are expected to be self-contained solutions to a problem, and students rarely have the expertise or time to really make a dent in the world. However, the kind of projects that seem to be considered “good projects” at IDC tend to be those that attempt to solve challenging social problems. This was a bit of an internal conflict for me—I did not want to pick a topic unless I personally found it interesting, and these areas just didn’t appeal to me. I eventually found a happy medium in misinformation, which seemed to be a real problem that I thought could be studied through the lens of interaction design.

Human communication is not perfect, and intentional or unintentional misinformation has existed for as long as humans have been talking to each other. The issue, as many authors have pointed out, is that the Internet has given everyone easy access to platforms with a wide reach, and content from sources with journalistic integrity and rigorous fact checking looks the same as crackpot conspiracy theories on social media feeds. It is very easy to believe fake news, and the scale and speed at which this information spreads is exponentially faster than traditional media. Fake news can be seen as a multi-dimensional problem and can be looked at from the lens of journalism, policy-making, technology, and design. However, by casting my net wide, it becomes extremely difficult to isolate the design challenges and opportunities from the other issues such as defining the ‘Truth’ in any practically useful way, trying to decide if satire should be considered as fake news, technology problems like access to WhatsApp APIs, etc. Most approaches discussed in the literature seemed to have a limited impact, and even a highly cited paper in Nature only claimed a small improvement in people’s ability to detect fake news. I decided to narrow down my scope to Misinformation on WhatsApp, and study whether people can recognise misinformation, and their sharing behaviour for items identified as false, true or unknown.

I wanted to explore qualitative methods, and I decided to use thematic analysis before I had decided my research questions. This later made it hard to justify why I was using thematic analysis—I hadn’t really explored too many other options and didn’t really try to do the necessary literature review of other possible methods of analysis of the type of data I was collecting. While looking at some of the CHI 2019 papers I later found some other methods that I could have adapted to my study, and in general I will try and do some reading about qualitative methods that I can use going forward.

I had been a little nervous about conducting user research for my project. The IIT Bombay campus is a safe cocoon that I had felt comfortable in, but the 18-24 year old, educated, tech-literate students I would typically find on campus would be the best equipped to detect fake news. In previous courses I had always worked in groups that contained Marathi speakers who inevitably started talking to users in Marathi, which seemed to immediately put participants at ease. I thought I would find it hard to get people from lower income, lower-education groups to talk to me about messages on their phone unless I could make them feel comfortable around me. I couldn’t speak Marathi, and so I planned ahead and practiced a short script to explain to people that I was a college student at IIT who wanted a few minutes of their time to talk about messages on WhatsApp. If they seemed interested, I explained the study and asked if they were okay with me audio recording our conversation, and explained that I wouldn’t use their name and this was only so I could go over this later. I also dressed to look the part of an IIT student (complete with a bag), and changed my study design to not require users to share any personal information.

Without any sort of external organisation to help with recruiting users, or really even a very clearly defined target audience, I eventually just steeled myself to go to the local station and recruit anyone who would be willing to talk to me. It turned out to not be as difficult as I had imagined. Some people were suspicious and did not want to talk to me, or were not comfortable with me recording our conversation, in which case I just thanked them for their time and moved on without any further attempts to convince them. A lot of people, however, were happy to talk, and some even skipped a few trains to talk to me for a longer time.

It took me about a week just to transcribe my recordings. I had not anticipated it would take this much time, or be this boring. Eventually I got it done, and then spent some time trying to highlight interesting sections in Google docs to get started on finding themes. This was very slow, and I eventually shifted to printouts with large margins so I could highlight sections and add annotations. 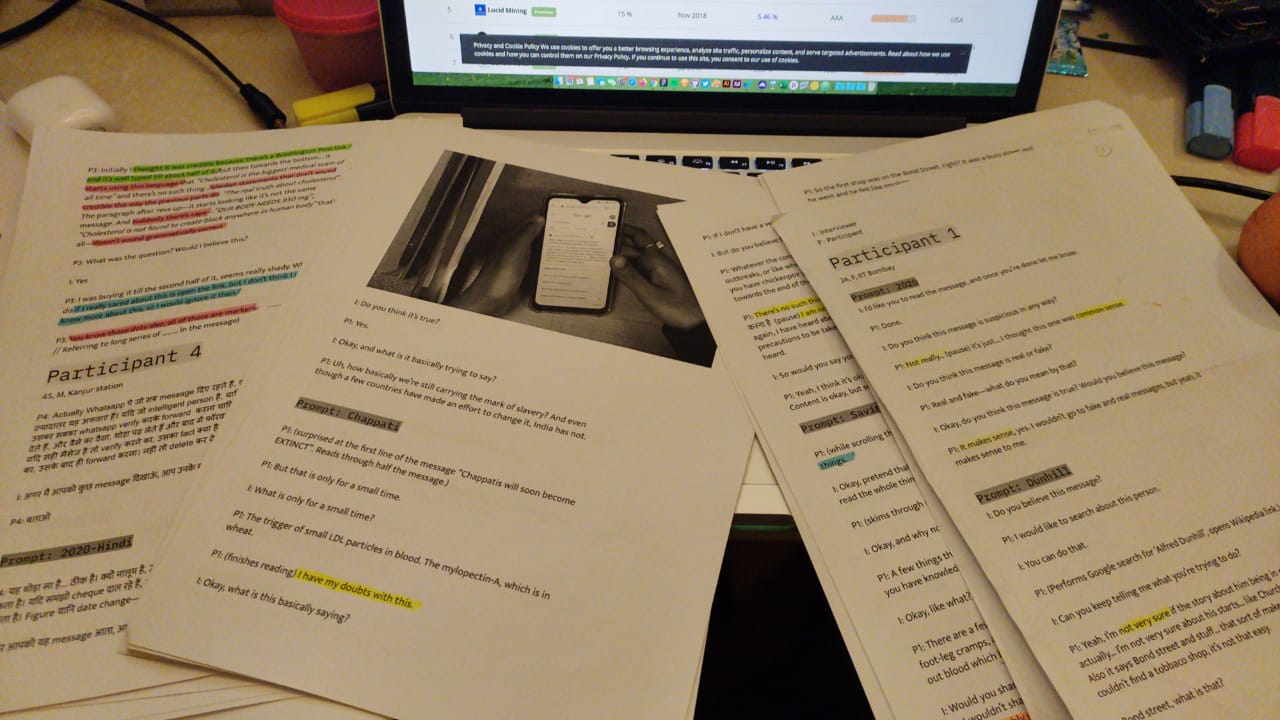 I was also taking notes on loose sheets, and sometimes on the margins of my printouts, and adding to a Google doc as I was writing my paper in parallel. At one point my room had papers strewn all over it because it was getting so hard to keep track of multiple trains of thought at once. 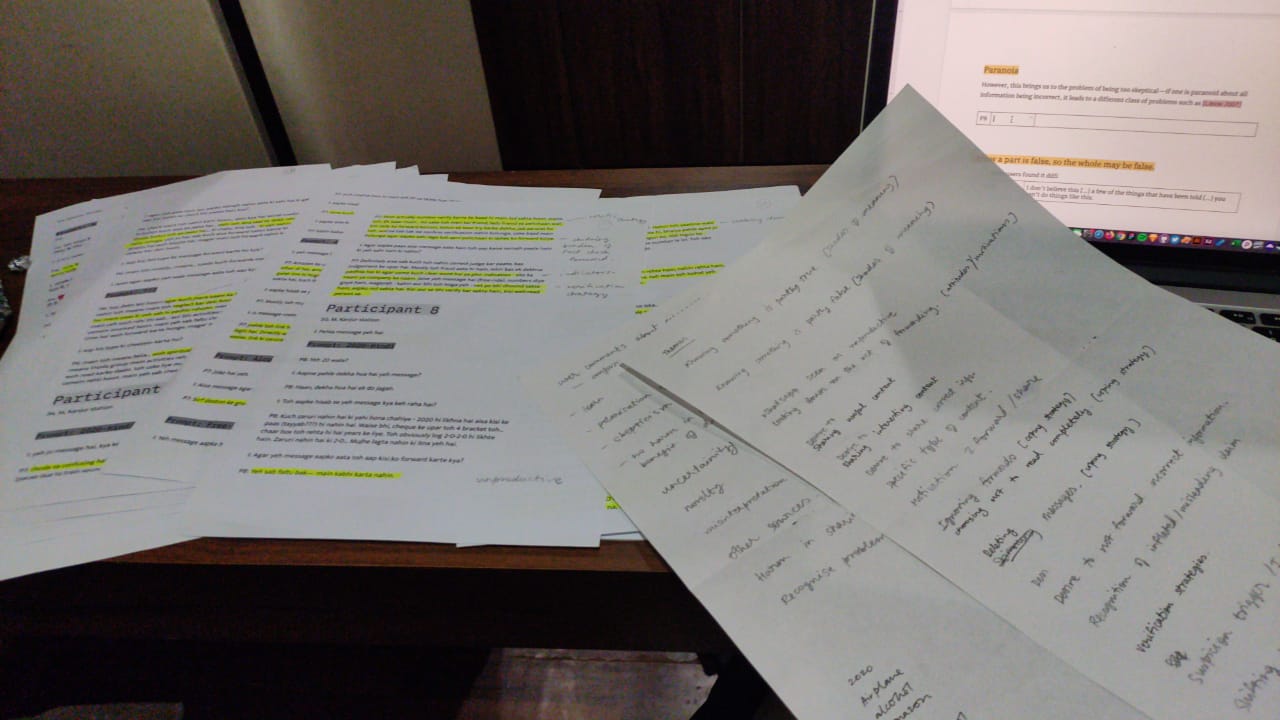 It made me appreciate the process of iteratively building themes using post-its/cutouts in contextual inquiry, and also how helpful it was to have other people to bounce ideas with. I might explore other ways of keeping track of multiple ideas across a text if I do a similar style of analysis in the future, because my process was quite messy and made it very hard to collate information in one place.

I didn’t have very clear research questions before going into the field. My focus was on talking to people, and getting an understanding of how people react to forwarded messages and what drives sharing behavior. My findings largely confirmed existing suspicions—people find it hard to distinguish misinformation merely by reading it, most people don’t bother with fact checking, and just ignore a large section of the messages they get every day. It became difficult to derive any insights that were very interesting for design interventions. I hence relied on the literature review and gut instinct to come up with solutions that I myself was not very convinced would work. This was probably apparent to reviewers, who pointed out that the discussion seemed disjointed from the analysis, and there was not too much new to be gained from reading the paper.

I don’t know if I will write more research papers, but I think the learnings from trying to express my thoughts in a coherent manner were helpful in general. I still need to work on improving how I structure arguments in a logical manner. I have been trying to write about my work on my blog, and hope to spend some of my time after graduating on writing about some of my projects, both to document what I have done in my time at IDC and to try and improve how I verbalise the thought process behind these projects.